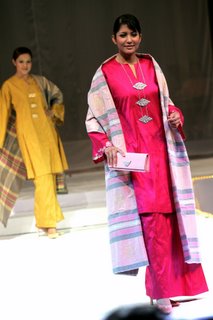 sometime just before raya, i went to embun to pick my baju kurung. i bought the baju kurung during embun's tsunami charity sale. that's like almost a year ago! :op

back to kasa rubia. i was holding the material and asked if they were in actual fact kasa rubia. natrah said they are and she said she had to wait over a year to get the shipment. told natrah, that i wanted to buy the kain. she replied, they are to be made into baju, if i want them i have to tailor them with her. there goes my kebaya pendek dream, and so i agreed to have them made into kurung pesak. she charged me RM 300 ++ for the kain and total cost inclusive of tailoring was RM 900. Gulp! all for a kasa rubia of my own.
last weekend, at the curve flea market, i saw a lady selling kasa rubia, real kasa rubia, there were a cheaper alternative which she called the-cheap-kasa-rubia (who are you kidding, customers are not dumb you know) but i don't like them. i was shocked to see the kasa rubia. when i asked how much were they, she replied RM 180. that's the only other place selling kasa rubia and it's half the price!
demmit! i just got punk'd by embun!
Posted by Erra at 10:59 am