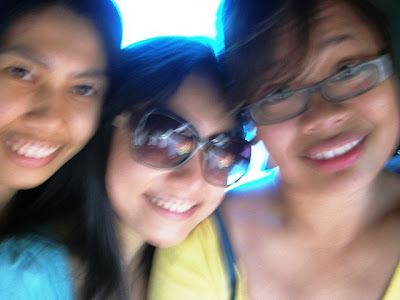 that's precisely how we were on the bajaj, or bajai as it's pronounced, throughout the journey to tanah abang. me being me, i had to exaggerate the shake, which had worsen the ride. :op

the only reason i get to travel on a bajaj was both my travel partners were running low on cash + we couldn't draw money through our maybank debit card (because we did not inform the bank that we were travelling to jakarta) + we forgot our credit card's pin number (actually, i threw my pin number in the bin ages ago for fear of what i might do if i have it). teehehehe!!!

woohoo!!! i had a blast riding the bajaj, i find them fun!

if you don't already know what a bajaj is, it's the bright orange + noisy three-wheeled motorcycle-like vehicles you see scattered all over the streets of jakarta. the 'retro' mode of transportation first became popular in india where they were developed with vespa + later adopted by + built in indonesia. what is known as bajaj in indonesia are known as rickshaw in africa, moto taxi in peru + of course, tuk tuk in the neighbouring thailand.

it's the cheapest + fastest mode of travelling in jakarta, i believe. if you're doing a short distance travel, it's also the kindest way of travelling (the persistent macet in jakarta would mean it'll take ages to reach your destination + the taxi driver would only get peanuts from the time spent driving).

the ride was hot + noisy + smelly + bumpy + heart stopping; all in all a grand adventure. i loved it when my bajaj driver decided to flip a u-turn in the middle of the road + when he ignored the red light at a junction, and zig zag thru cars to cross the flow of traffic + when he went on the curb and squeezed between a sand lorry and a lamp post to avoid the macet.

if you can't afford a roller coaster holiday, i highly recommend going to jakarta for bajaj rides.
Posted by Erra at 8:24 pm

i cant afford a roller coaster holiday nor a bajaj.tuk tuk only can lah..seriously cant wait for bangkok.weeee!

i must story about you to my friends izzit?

had similar experience when i was in colombo, only there they call it auto/oto. laff me head off like some ijit all the way.

till now, i dunno why i laughed that hard he he he

'cos its fun maa ... alamak! the driver can get offended ek?

if i were the driver, i wouldve!