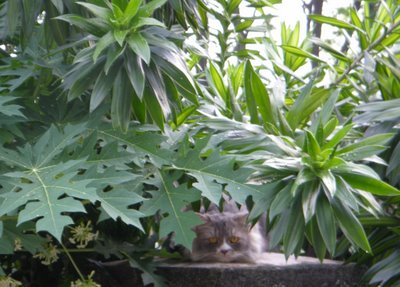 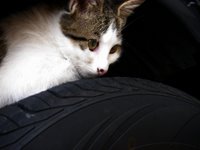 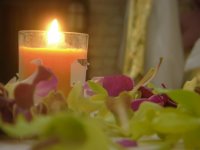 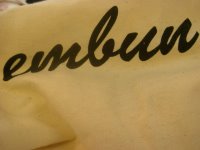 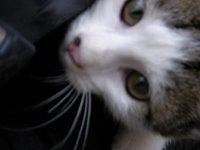 have a good weekend y'all

cute kitty but don't come near me. u have a great weekend too wegra!

no risk / monopoly et all gathering kat this week?

you're afraid of cats as well?

i've neglected some of my other friends, one dah tunjuk gaya2 merajuk, kene give tlc skeet this weekend...

For those who are already in oversea and live comfortably. There is no reason for you to come back to Malaysia. Life in Malaysia is getting tougher each day.

Frankly, as a Chinese, I don't see there is any future for our next generation.

Is sound nice, but isn't how German Nazi and Japan militarism started the world war using the same mentor? Under the great "ask what you can do for the country."

Patriotism? Yes, I understand how you feel. Your love for the country was spoilt by the political party. Since non-malays will always be a second-class citizen, so you are probably the same in any other countries, if not better.

You get cannibalised by your own countrymen, intellectually and professionally.

As someone else advised, be a global citizen.

Patriotism does not need you to be in Malaysia to work your due. Let no one pointed at you and say you are a traitor if your true intention is to generate good deeds for Malaysia wherever you are.

Save your time about coming back to Malaysia. Nothing will change in Malaysia. At least not even in this lifetime. Racism will still be here to stay, and also everything else.

I think there is such an entrenched discrimination against the Chinese and Indians in Malaysia, that it will take probably a whole generation to undo the damage.

This is happening in whole spectrum of the Malaysian government, civil service, state governments and universities. Just look at percentage of malays in all these government bodies - 98%..........

A whole generation of malays has been brought up to think that it is their inherited right to own Malaysia. The other races are damned.

I think the malays especially those in power, are scared right now that if they will to compete openly with other races, they will surely be the loser. You will see very strong resistance to hire other races even the most qualified.

The malays are never brought up to compete on even ground. This is fault of previous PM and now the present PM has to tread a balance ground to ensure the malays are not cast away as well as to make Malaysia competitive worldwide.

In US I never met a malay immigrant, although there are thousands of Malaysian Chinese and Indian immigrants. Why? Malays in Malaysia have an easier life where they are literately prince of the land.

We have infrastructure good enough to be considered first world or better. Look at the Cyberjaya, Petronas Twin Towers, Putrajaya?

Gleaming high-rise buildings but also in every city, dirty toilets abound, litter clogging up the drains, public telephones damaged, plus unreliable rubbish collection and disposal. We just treat public facilities badly, not caring about others.

Being an urban dweller myself, I am constantly disheartened by the poor public infrastructure and upkeep in our capital city.

Your children can't even walk safely along the Kuala Lumpur streets, as they might be bags snatched, kidnapped, murdered, raped, or robbed, as they do not know the jungle laws of Malaysia. The police won't help much as they now have a big pile of corruption cases running after them.

You owe nothing to Malaysia, you pay your due, so live on.

So, my last advice. Don't come back unless you are really suffering in oversea.

I am sorry this sounds very racist but I think we have to be honest in discussion.

Yes, a lot of non-malays in Malaysia are leaving this country. But what the hell, they (babiputras) don't care. They are happy that we leave.

I do agree with you of those you mentioned, our country is stepping backward, we are loosing in all aspects and yet overdue and retard ministers are still available on shelf. The ministers think that they are the only ones capable and qualified to be there and not replaceable, otherwise the country could collapse.

Looking at Afghanistan, Iran, Iraq likes looking at this country future. The well-connected bumis are getting richer. This government is spoon feeding the bumis at this nation expense. I am sick of this country too.

My advise is let them rot in their own stew.

The Barisan government has achieved 0% in reversing the trend of racism.

While South Africa has disbanded racism through the government's initiative after the global news onslaught, our Malaysia government leaders are propagating RACISM and FACISM in every way.

In term of racism, we are the most uncivilised country in the world. Look into our neighbouring countries of Asia, they are advancing economically on a straight forward objectives, for their citizens.

Whereas, we are moving in deviationist path, widely off the international economic theory, for the sole objective of propelling the well being of a supreme race.

Mahathir era is over, here we have Badawi. Is he changing the trend? Not a single sign of it! How about the future under Nazib?

Sad, sad. They have more camouflage in readiness.

It is undeniable that malays are stupid, lazy and incapable. Why don't they just humbly admit the facts and repent and learn from other races especially Chinese?

What is the point to argue here and wasting time again?

From the first onwards we were merely telling the truths. It wasn't us who think that way but their own Pak Lah as well.

All malays should go and read the newspaper, even Pak Lah is ashamed of maintaining the NEP after 34 years of implementing it and these malay baboons are still asking for it.

Even Pak Lah wanted them to compete on a level playing field.

So what does all these tell the world? It sends a very clear message that it is malays themselves who are incapable and lazy and they don't even want to admit it and make a change!

That is the biggest shame of all.

Can't you see, it is all back to square one. Year in, year out, some talk for half an hour, some one, some two. Some sing, many belt out their most recent released 'pantun'.

After all. Malays are good at that. Suggestions after suggestions, some good, some impossible to realize.

But, do you see any of these materialised? Hardly. Why, why and why???

Because the malays can never change. Never! Why?

The leaders forgot or were it they simply didn't want to admit and address that the actual disease is the malays and the remedy itself is also, the malays. They can never change. What is it about the malays?

Firstly as you all know, they are a lazy species. Since the beginning of time they have been like that. Even the encyclopedia called them as lazy people. I think those British with their accent tried to call them 'malas', and if you put 'y' in, it becomes 'malays'.

Embracing Islam make them a worse lot. Now they have a license to kill anything that gets into their way.

Malays are ungrateful lot. In reality, they just can't live or open their minds for others. When Mahathir said that they are complacent, they put him in jail. When Mahathir encouraged them to learn English language, they got angry with him, saying it is a 'bahasa penjajah'.

When other races 'maju', they got angry with them too. That was why at the end of Mahathir his regime, he said this, "I have achieved greatness as a prime minister, but I only fail in one thing, changing the malays."

Well, nothing to be surprised about anyway since Mahathir is not really a malay, and I guess that was why the malays were angry with him.

To them, malay is the biggest impediment towards building a truly Malaysian nation, and should be chucked into the dustbins of history.

A genetically flawed race cannot be fixed by politically. Nature will take its course and globalization will put them out to pasture.

What have we got now?

Sad. Sad. Sad. The question asked by many of my fellow Chinese is this - Why can't you just tell the malay peoples to adopt Chinese culture which is superior?

From research, this peninsular was part of the Siamese empire way before these malays from Indonesia invaded it.

Still so thick skin, don't want to go back to Indonesia!

i'm i the only person lending you my ears, giving you love???

3 am last night??? i was with my friends and you vomiting hate to a stranger.

still so thick skin, don't want to go back to China? at least i'm perfectly right.

and you, you asked me to go back to Indonesia when i've got arab, siam, and indian in my blood in addition to the javanese, mandahiling + perak court.

my heart bleeds for you, you poor poor thing ...

you skodeng me, you don't skodeng the dark nooks eh?